Keep the mind active: Book Reviews From Our Copywriter

Need a break from Netflix but too unmotivated to fit in your next at-home Pilates session? Now's a time to find a cosy spot on your couch and catch up on all those fiction novels that have been collecting dust these past several years.

Our Hello Molly Copywriter shares her fave book recommendations that are perfect for forgetting that you're stuck in self-isolation. Check them out now - 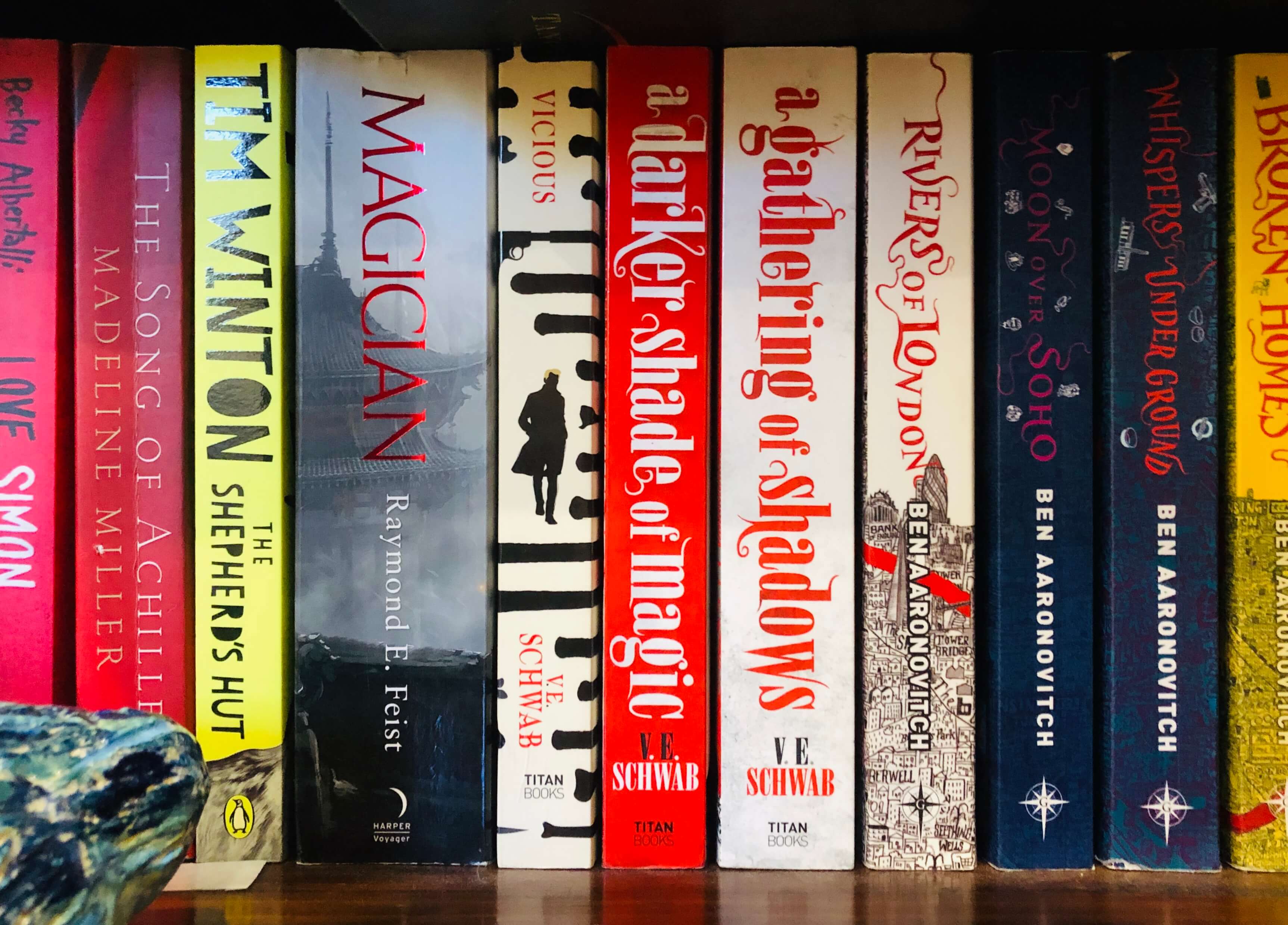 I'm a lover of fantasy fiction, but if I had to narrow my choices, Phillip Pullman's Book Of Dust. It's one of those coming of age reads imbued with romantic imagery, mysticism, theology and adventure, making it the perfect choice for a cosy read on the couch. As a fan of 'His Dark Materials' series, this is a must-have. The Book of Dust: La Belle Sauvage focuses on young Malcolm, who with his daemon and family live harmoniously on the outskirts of a theoretical Oxford. The book primarily emphasises the events prior to the arrival of Lyra Belacqua at Jordan College, setting up the story of The Northern Lights.

Jeff Noon: A Man Of Shadows

If you love a bit of crime fiction every now and again, A Man Of Shadows by Jeff Noon is a definite read. This brilliant mind-bending novel reads exactly like an old noir epic from the 1920s-30s, embued with elements of sci-fi and parallel worlds. This novel is a feast for visuals and atmosphere. If you want detailed world-building, Jeff Noon delivers. This is a book where lead characters are involved in illicit drugs, and where half of the city's residents thrive in neverending sunlight, whereas the other half are destined to live out the rest of their days in perpetual darkness. The novel focuses on sleep-deprived private investigator Nyquist, who is forced to venture into the disturbing realm of Dusk, which will test him to his limits, physically and mentally.

I don't usually dabble in WW1 or WW2 related genres, due to the heaviness of the plots and the complexity of the politics but this book was recommended to me many times so I caved. This is the first novel I've read by Australian actress and author and I can firmly say, she has a new fan! I struggled to put this book down and read it in one day and well into the night (2:00am to be exact!)

Throughout the entirety of the sitting, I was immersed in the happenings, the political intrigues and the issues of racism of 1942 Townsville Queensland. On the brink of the Japanese invasion, Khaki Town evoked so much emotion within me. It made me laugh, cry and fume within one go. This book is inspired by a true story that the government did not want to be told... but one that needs to be told, in both American and Australian history.

Australia is on the brink of invasion from Japan. Townsville, in far north Queensland is a major hub for both Australian and American troops. It's a safe haven for all, regardless of rank. And although Aussies are accepting of their American allies, there is still animosity and undeniable jealously of their wealth and treatment. This story is inspired by the truth of unbridled racism among the US and Aussie troops, a true tale that the government so desperately wants to conceal. However, it is still a WW2 story that needs to be recorded within the pages of American and Australian history.

A definite read from me.

I'm not ashamed to share that I am easily swayed by award-winning books. I see a gold sticker on the cover, I have to read it! It's won four Australian literary awards! The fanciful lifestyle of chaotic youth of heroin-drenched Brisbane is moulded and twisted into an almost dream-like story-telling, one that is fantastical but undeniably Australian.

We follow Eli Bell, a young man born into unfortunate circumstances. His brother is mute, his father is a drunk, his step-father deals in heroin and his mother is headed for jail. He seeks comfort in his pen-pal, who in a strange twist of fate is a prison inmate. When he tries to improve his daily lifestyle, his plans go south resulting in horrific consequences, opening a fantastical universe that is equally exhilarating and heart-breaking for our protagonist. Four literary awards well deserved.

Remember how books were just, funny for the sake of being funny? Pick up Good Omens. Yes, you should read this delightfully funny book before you watch the Amazon Prime series. What's the plotline to this hilarious novel?

In a few short words: Old bickering couple who've been married for millennia are forced to stop the apocalypse but have no idea how to do so. Oh, one's an angel and one's a demon. Created by two of the most beloved authors in the world, Good Omens is a profound philosophical treat, exploring the concepts of good versus evil, nature versus nurture, with the four horsemen added in for effect.

Nevertheless, the foreboding sense of dread of an incoming end of the world is masked with a madcap caper of the M25 motorway, raining fish, Atlantis, angels, demons, footnotes for our American readers, witches, plenty of Freddie Mercury, a rather inaccurate book of prophecy, driving a flaming car and an accidental baby swap.

Yes, this book is truly ineffable.

Mackenzi Lee: The Gentleman's Guide To Vice And Virtue

I'm putting this hoot of a recommendation on my list due to the novel's unbridled characters and the plentiful "WTF and "No, don't do that!" moments running through the entirety of this book.

Believe me, when I say, you will be on the floor in stitches (or alternatively throwing your book across the room) because the characters in this book are so insane it's like watching a sitcom. As ALA Booklist beautifully puts it, The Gentleman's Guide To Vice And Virtue is "A gleeful romp through history."

This 18th-century modern adventure follows the dashing rogue Monty, who in 21st-century standards, would be the precursor for every rich frat boy who woos anyone with a pulse, men included. Monty has little care of his status as a gentleman nor that his roguish and seductive behaviour is anything but 'gentlemanly'. However, his quests for pleasure and vice are in danger of ending when his estranged father forces him to embark on his grand tour of Europe. If you want a laugh but after some significant plot and 18th-century history thrown in, this is a must. A nice read during self-isolation.

I've enjoyed five books out of Ben Aaronovitch's critically acclaimed Rivers of London Books during long forty five minute train rides to Parramatta and back. Every time I read the opening passage of the first page, it would take all the will power not to burst out with laughter in the quiet carriage. As a whole, the books border around crime fiction. However, the book series balances dark imagery through perfectly timed 'British' one-liners and insults that are impossible to ignore.

We follow PC Peter Grant who longs to become a detective in London's metropolitan hub. Unfortunately, his superiors have other plans for him. Until he inadvertently gains exclusive info to a puzzling, bizarre murder and discovers his newfound abilities to talk to the dead. Oh, a splattering of magic thrown in. It's like if Harry Potter joined the fuzz and grew up as a very skeptical millennial.

Here's why you should read it!

It's smart in its use of language and imagery.

It's set in London and written by someone who obviously thrives in the London scene.

The main character has a great voice. (Although I don't particularly enjoy the first-person narrative, Peter's sarcastic wit is the icing on the cake!)

Jennifer Egan: A Visit From The Goon Squad

Another book winner to add to this never-ending list! Believe the hype. I don't usually gravitate to tear-jerkers because they leave me a mess for a few hours of my day. A Visit From The Goon Squad is the saddest, wisest book I have ever read, which is not to belittle it. This novel admittedly swoops back and forth between time periods, fonts and even features a chapter written in a PowerPoint format, as it attempts to chronicle the lives of every character, major and minor, created by Egan. At first, I thought the author's unusual temporal displacement between formats was an unnecessary post-modern gimmick. However, every short story is poignant and, characters beautifully linked to create a heart-wrenchingly atmospherical collection of love, loss, temporal displacement and the inevitability of death.

Madeline Miller: The Song Of Achilles

The Song of Achilles is coming of age book, touching, slow-paced and tender, making it the perfect read for rainy days at home, or if you're after something tear-jerk worthy. Yet another award-winning book, based off Homer's epic poem, The Illiad and the legendary love story of Achilles and Patroclus. Although I'm still working on reading more LGTB literature, this is a definite must-read if you're a lover of Greek mythology and the ever-popular trope of fairy-tale-like quests. Unlike the fearless, unstoppable demi-god portrayed by Homer in the Illiad, Miller strips the epic tale bare to its naked, tender form. She re-writes the tale beautifully, emphasising the vulnerable, human-side Achilles, creating a gut-wrenchingly innocent story of childhood love between the youth and his loyal partner Patroclus.

Back to Travel Notes